14 Injured as Bus Flips Over on Slick Road 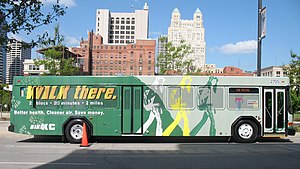 During a thunderstorm in the Kansas City area on Wednesday, August 8, 2012, a Kansas City Area Transportation Authority bus flipped over on a slick road and slid down an embankment in Platte County. The bus was carrying 12 passengers at the time of the accident.

The accident took place a little before 8:00 p.m. in the 5600 block of Northwest Prairie View Road. Kansas City Police Sergeant Bill Mahoney said the bus was traveling south on Northwest Prairie View Road when a car pulled out in front of it. The driver of the bus made a hard turn to the right to try and avoid the car, but it clipped the car and flipped over at least once as it went down the embankment.

The bus was not a full-sized Kansas City Area Transportation Authority bus. It was a smaller, 25-foot bus.

The bus came to rest perpendicular to Northwest Prairie View Road. The undercarriage of the bus was left facing the sky. The metal exterior was ripped off of the frame on one side of the bus, and pieces of the bus were scattered on the embankment.

A spokeswoman for the Kansas City Area Transportation Authority, Cynthia Baker, said that the bus was traveling on its regular route. It was headed downtown and was driven by a veteran bus driver.

14 people were injured in the accident and sent to hospitals. Thankfully, only 2 of the 14 that were taken to hospitals were thought to be seriously injured, but with non-life-threatening injuries from the accident.


Could have been much worse

Sergeant Mahoney said that the people in the bus were very fortunate considering the extent of the damage to the bus. It could have been much worse. There was a great deal of broken glass, cuts and reports of a broken leg and a broken arm, as well as other injuries.

Jesse Adams was a neighbor who saw the accident. He was taking his kids for treats at a convenience store across the street. He said the car was spinning its tires on the wet pavement as it tried to get out of the way of the bus. He said the bus hit a curb that had just recently been put in as it tried to avoid the car. When the bus hit the curb, it became airborne.

Adams said, People were just piled in there. It was like someone took a salt shaker and shook it up.

Adams said that he helped a man and a girl who had been trapped underneath the man inside of the wrecked bus. The Fire Department also had to get two people out of the wreckage who were injured.

Sergeant Mahoney said that the police had ruled out impairment on both the driver of the bus and the driver of the car. The car driver went to the hospital with minor injuries. Two passengers in the car were not injured.

If you have been injured due to the negligence of someone else, you may be entitled to receive compensation for your injuries. The wise thing to do is to call a personal injury attorney and let him or her evaluate your case.