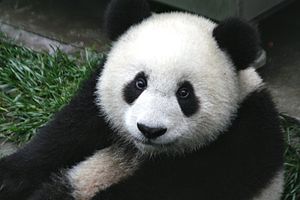 Sunday, September 16, 2012, was truly a day of great joy and blessing at the Smithsonian National Zoo in Washington, D.C.. A giant baby panda was born that was thought to be a female.


This was a cause of great celebration due to the fact that giant panda births in captivity are rare. The baby pandas mother, Mei Xiang, has had 5 false pregnancies since 2007. When natural mating with her mate, Tian Tian, failed earlier this year, the female giant panda was artificially inseminated on April 29 and 30, 2012, with sperm from Tian Tian, which had been frozen in 2005. The female panda had less than a 10% chance of conceiving by artificial insemination.

On Sunday morning, September 23, 2012, the joy and celebration was changed to heartbreak. Panda keepers heard 14-year-old Mei Xiang let out a distress call. The panda keepers found the baby panda unresponsive. They immediately did CPR on the baby panda, but they were not able to revive the newborn cub.


Size of a stick of butter

The baby panda was about the size of a stick of butter and weighed only about 4 ounces when it died. Giant baby pandas are helpless, hairless creatures that can easily be crushed by their mother, but no signs of injury were found in the cub. A small amount of milk in the baby pandas digestive system were an indication that the cub had nursed.

On Monday, September 24, 2012, Smithsonian National Zoo officials said that a post-death examination showed several abnormalities, but it would be two more weeks before they determined the cause of death.

On Thursday, October 11, 2012, Chief Veterinarian Suzan Murray said that the baby pandas death was caused by liver trouble and signs of lung disease. After a complete necropsy was performed, scientists discovered that the tiny cubs lungs had not completely developed. This probably meant that the baby pandas lungs were not sending enough oxygen to its liver. The baby pandas birth was possibly premature.


Property of the Chinese government

The adult giant pandas and any cubs that are produced are the property of the Chinese government. Tian Tian and Mei Xiang have been here in the United States on loan from the Chinese government since 2000. According to an agreement between the Smithsonian National Zoo and China, the giant adult pandas will stay here until at least 2015.

Zoo officials hope that if anything positive comes out of the baby pandas death it will be that they learn more about giant panda health and reproduction. Donald Moore, the zoos associate director for animal sciences said, As unfortunate as this was, this baby and studies of this baby post mortem are contributing to our knowledge of panda reproductive science.

Researchers estimate that there are only around 1,600 giant pandas left in the wild. They believe that captive breeding is an important way to conserve and study this endangered species.