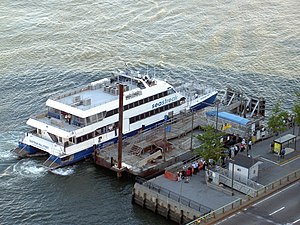 On Wednesday morning, January 9, 2013, the Seastreak Wall Street ferry left the dock in Highland, New Jersey around 8:00 a.m.. The ferry is a commuter ferry that was carrying 326 passengers and 5 crew members. The commuter ferry was due to arrive in Manhattan around 8:45 a.m.

The trip on the commuter ferry seemed to be uneventful and going as usual. However, at around 8:45 a.m., the commuter ferry hit a slip at Pier 11 in Lower Manhattan near Wall Street and kept going until it crashed into a second slip. The force of the impact from the accident tossed people like rag dolls. It threw people into the air and against walls, windows and seats. Others were sent tumbling down stairs.

As the commuter ferry approached Pier 11, witnesses said that unsuspecting commuters had gotten up from their seats and were packed in closer atop stairwells and ferry exits. This is what normally occurs as people get ready to exit the commuter ferry.

As the commuter ferry was making its final maneuvers, passenger Ashley Furman, a 26-year-old native of New Jersey, held on to her hand-bag and was making small talk with other commuters. Then everything went black.

Like scores of other people who were left bloodied and writhing in agony and pain, Furman woke up in pain on the floor with the wind knocked out of her, about six feet from where she had been standing. She said, It felt like an elephant landed on me. Once I was able to catch my breath, I got up and it was very scary.

Coast Guard Captain Gordon Loebl estimated that the commuter ferry was traveling at about 14 knots, or 16 mph at the time of the impact. He said, We know that they hit the pier at a relatively high rate of speed.

After the crash, a large gash was visible in the underside of the commuter ferry. The ferry is operated by Seastreak LLC. At a news conference hours after the crash took place, James Barker, the chairman of Seastreak LLC, said it was a terrible day for all of us.

Barker added, We are simply shocked and stunned that this happened. Our priority continues to be the people who are injured. He also said that the company would work with investigators from the National Transportation Safety Board to determine the cause of the crash.

The captain of the commuter ferry was 36-year-old Jason Reimer. He is the Seastreak ferry lines most experienced captain, with 12 years at the helm. Reimer told investigators that the reverse thrusters would not work as the ferry approached the dock. He told the National Transportation Safety Board that he tried to slow the ferry, but the commands did not respond.