Hurricane Sandy has brought deadly destruction and devastation to the East Coast of the United States. Hurricane Sandy has been dubbed Frankenstorm because of hitting during Halloween week, and also because the storm has such monstrous proportions. 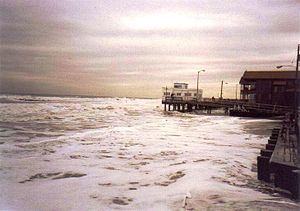 Hurricane Sandy has also been called The Perfect Storm. This is because it has collided with an unusually early winter storm coming from the West and a fierce blast of arctic air coming from the North to form a superstorm.

Hurricane Sandy hit the East Coast near Atlantic City, New Jersey at around 8:00 p.m., Eastern Time, on Monday, October 29, 2012. The storm hit with 80-mph winds as it made landfall, which was down from 90-mph winds that were clocked earlier on Monday.

The monstrous size of Hurricane Sandy was evidenced by the fact that she had hurricane-force winds that extended up to 175 miles from its center. The storm had tropical storm-force winds extending out to 520 miles.

As Hurricane Sandy hit the East Coast, floodwaters rushed into New Yorks subway tunnels. Neighborhood streets across the Northeast looked like rivers. Homes were washed off of their foundations and pushed on to one of the state highways in New Jersey. The heavy winds brought trees and power lines crashing down to the ground.

Thousands of people were forced to leave their homes and go to shelters. Almost 8 million people in 15 states and the District of Columbia were without power.

At least 30 people have been killed by Hurricane Sandy here in the United States and one person in Canada. This brings the death toll to at least 98, counting those killed as the storm roared through the Caribbean.

Hurricane Sandy was responsible for fierce winds all the way from northern Georgia to Canada and all the way west to Lake Michigan. Heavy rains drenched New England and areas of the Midwest.

In West Virginia, Hurricane Sandy was responsible for a blizzard that dumped 3 feet of heavy snow like concrete. Trees were knocked down, streets covered with masses of wet snow and power knocked out.

Although the Northeast corridor of the United States took the major wallop of the storm, Hurricane Sandy has affected a much wider area of the nation. As of Tuesday, it is still moving over western Pennsylvania.

Predictions from forecasters are that the storms center of circulation will probably be north of the Great Lakes by Wednesday. Disruptions in power could still occur as far north as coastal Maine. The potential for flooding could extend as far west as Lake Michigan, and coastal flooding could still take place in spots that may range from 2 to 4 feet.

As the damage brought about by Hurricane Sandy began to be surveyed on Tuesday, officials said it was impossible to measure the destruction that the storm has caused. New Jersey Governor Chris Christie described the devastation as unthinkable. New York Governor Andrew Cuomo said, I dont think words like catastrophic or historic are too strong to explain the impact. According to Kinetic Analysis Corp., the economic impact of the storm could amount to $25 billion.