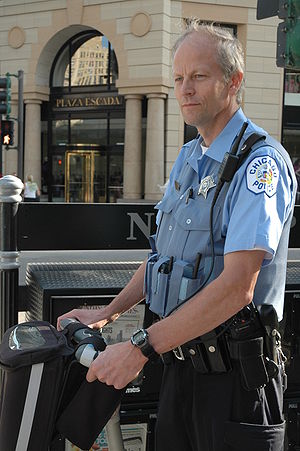 Covarrubias had just learned that he was being investigated. The police officer threatened to kill himself.

Santa Maria police Chief Danny Macagni said that it became necessary to arrest Covarrubias, immediately. In a statement Macagni said, We had no choice. He said investigators had evidence that demanded that we go out and take this officer off the street immediately.

Macagni said that he was not able to give any details because of the sensitivity of the investigation. However, he said there was some witness intimidation involved. He said the arrest could not wait for a more proper place or time.

Macagni said, The information that we had in hand demanded that we not let him leave that scene, get in a car, drive somewhere, it would put the public at risk. We just did not know what was going to happen, we did not expect him to react the way that he did.

It is alleged that as Sgt. Chris Nartatez tried to arrest his fellow police officer, Covarrubias took his gun from his holster and fired at Nartatez. This led to a struggle between Covarrubias and two on-duty police officers.

Police officer Matthew Kline was a witness to the struggle and shot Covarrubias three times. Covarrubias died later that night after emergency surgery.

There was a long investigation of the incident. It was the ruling of the local district attorney that Kline had reacted in an appropriate way to a life-threatening situation. He ruled that Kline would not be charged for what he did.

The family of Covarrubias think that the police department violated several laws in the investigation and arrest of their family member. The family also believes that the exoneration of officer Kline was a politically motivated decision.

The family believes that the investigation was conducted with a pre-determined outcome clearing the city and its officials of any wrong doing. The attorney for the family said that the investigation represented an attempt to protect officials at the highest levels of the police department.

If you believe that you family member or loved one was the victim of a wrongful death, you should contact a personal injury attorney.