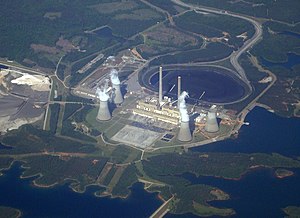 Plant Scherer is located in Juliette, Georgia, just north of Macon, Georgia. Georgia Power is the owner of a portion of the coal-fired power plant. There are also five other utility stakeholders that Georgia Power manages the power plant on behalf of.

Recently, several lawsuits have been filed against the owners of Plant Scherer and the nearby Vulcan Materials rock quarry alleging that pollution from these facilities has resulted in injuries to area residents. While a handful of the lawsuits name the Vulcan Materials rock quarry, all of the lawsuits accuse Plant Scherer and its owners of harming its neighbors property and health.

In addition, the lawsuits allege that Plant Scherer engaged in fraud, battery, negligence and racketeering. The charge of racketeering is founded on claims that the owners of Plant Scherer, which includes Georgia Power and its parent company, Southern Co., conspired to keep from having the cost of putting in a lining in the 750-acre ash pond.

In an e-mail, the vice president of human resources for Vulcan Materials Co.s east region, Jimmy Fleming, said that the companys rock quarry meets or exceeds all state and federal regulations. He wrote, there is no evidence of causation, and the lawsuit is without merit.

A spokesman for Georgia Power, Mark Williams, said in an e-mail that the company had not seen the lawsuits. He stated that Georgia Power complies with all federal and state water and air quality regulations. He also said that tests on the water around Plant Scherer have indicated that the water is safe.

Attorneys for those filing the lawsuits are not answering questions concerning the results of water tests on the wells of the residents. However, attorneys have conducted their own testing of residents and wells. The attorneys did say that their tests had found selenium, chromium, lead, thallium, arsenic, radon and uranium in the wells. All of these are by-products of burning coal, although they can occur naturally.

The lawsuits are being handled by Gautreaux & Adams in Macon, Georgia in partnership with the New York law firm Napoli Bern Ripka Shkolnik LLP. Brian Adams, who is partner with Gautreaux and Adams, said, Some of these elements are naturally occurring, but the levels weve found are not naturally occurring.

Some of the injuries alleged to have been brought about by pollution from Plant Scherer include cancer, kidney and liver problems. Other alleged injuries from the pollution are asthma and chronic breathing difficulties.

If you believe that you have suffered injuries from pollution produced by a nearby company, it may be a wise idea to contact a personal injury attorney.