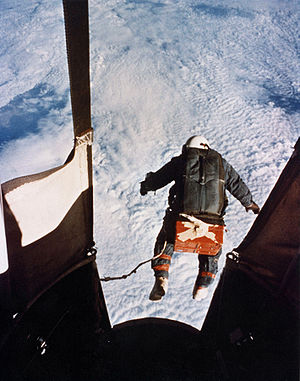 It certainly has to be one of the greatest and most daring and dangerous accomplishments ever performed by a human being. It was the successful space jump made by Austrian skydiver Felix Baumgartner on Sunday, October 14, 2012.

The date of the space jump was significant. It was the 65th anniversary of the sound barrier being broken on October 14, 1947 by American Chuck Yeager in the Bell X-1 rocket plane.

One of Baumgartners goals was to break the sound barrier. In his freefall, the daredevil reached a maximum speed of 833 mph, according to Brian Utley, an air sports official that was overseeing the event. This maximum speed was Mach 1.24. This is much faster than the speed of sound, which at high altitudes is around 690 mph.

Baumgartner said he felt no difference as he was breaking the sound barrier. The daredevil said, When youre in that pressure suit, you dont feel anything. Its like being in a cast.

The space jump was originally planned for Monday, October 8, 2012. However, that attempt and another one on Tuesday, October 9, 2012, could not be made because of gusting winds.

Baumgartner made the space jump from a 55-story helium-filled balloon. This enormous balloon was constructed from materials 10 times thinner than a plastic sandwich bag. Because of this, even moderate winds could damage the huge balloon.

Finally, at 9:30 a.m. local time, the enormous balloon lifted off from Roswell, New Mexico. The balloon carried the daredevil into the air in his custom-built 2,900-pound capsule.

Even though it was looked at as a space jump, the mission known as Red Bull Stratos, sponsored by the Red Bull energy drink company, was called a Mission to the Edge of Space by project officials. This is because the officially recognized border of space is much higher. Most experts see space as starting at an altitude of around 327,000 feet or 62 miles.


Landed on his feet

Just after 12:00 p.m. the daredevil stepped into the void nearly 128,000 feet or over 24 miles above the surface of the earth. Baumgartner landed safely on his feet in the desert floor outside of Roswell about 20 minutes later. This made it the highest-ever skydive, breaking the record of 102,800 feet, set by Joe Kittinger set in 1960, while a captain in the United States Air Force.

In fact, it was Kittinger who communicated with the daredevil in his ascent from mission control on the ground. As Baumgartner descended under parachute, Kittinger radioed him, I couldnt have done it any better myself.

Preliminary results show that the daredevil spent about 4 minutes and 20 seconds in freefall. This is also a record without a drogue parachute.

Baumgartner went into a harrowing spin during his freefall. However, the daredevil was able to come out of the spin and come down in a controlled descent. Baumgartner also said that his visor fogged up during the space jump.

Right before his leap, Baumgartner said, I know the whole world is watching now, and I wish the world could see what I see. And sometimes you have to go up really high to see how small you really are.