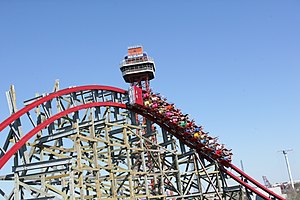 Six Flags Over Texas opened in 1961. It was the first amusement park in the Six Flag system. Six Flags is located in Arlington, Texas, about halfway between Dallas and Fort Worth.

The first fatality at the amusement park happened in 1999. A raft-like boat on the Roaring Rapids ride overturned in 2 to 3 feet of water. A 28-year-old Arkansas woman drowned and 10 other passengers were injured.


Concern for her safety bar

On Friday, July 19, 2013, another tragedy at Six Flags took place. 52-year-old  Rosy Esparza was making her first trip to Six Flags. Her son Amando said that his mother had been having a good time. Then around 6:45 p.m., they came to the Texas Giant roller coaster. Witnesses said that Esparza expressed concern to one of the Six Flags employees that her safety bar was not completely engaging as the ride was about to start. Then, when the ride went up and was starting to come down, Esparza went flying from her seat down to the roller coaster track where she was pronounced dead on the scene.

One of the witnesses, Carmen Brown, said she was waiting in line to get on the ride when the accident happened. She said, They didnt secure her right. One of the employees from the park - one of the ladies - she asked her to click her more than once, and they were like, As long as you heard it click, youre OK. Everybody else is like, Click, click, click. Hers only clicked once. Hers was the only one that went down once, and she didnt feel safe, but they let her still get on the ride.

Brown also said, She goes up like this. Then when it drops to come down, thats when it (the safety bar) released and she just tumbled.

Six Flags is conducting an investigation into the tragedy. Six Flags CEO James Reid-Anderson said that the company would not release any additional information until its investigation is complete.

A German roller coaster maker is sending officials to Six Flags to inspect the ride where the tragedy took place. Tobias Lindnar, a project manager for Gerstlauer Amusement Rides in Munsterhausen, Germany, said that the company will investigate what led to the tragedy at Six Flags last Friday.

Esparzas son, Amando, paid tribute to his mother on his Facebook page. He wrote in Spanish, Ive never discovered a day as long as this one. Its very sad that I lost my mom, but Im happy that I was able to enjoy her to the maximum while she was alive.

Police said that there was no evidence of foul play or criminal intent. They are still investigating the death. Police are examining photos and videos and interviewing ride operators.