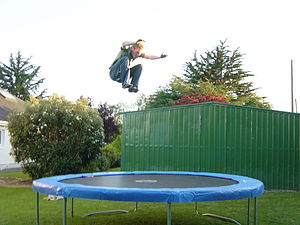 Dr. Gary Smith, president of the Child Injury Prevention Alliance and spokesman for the American Academy of Pediatrics, said that trampolines were originally designed and intended as training devices for acrobats and gymnasts. Later on, Dr. Smith said, trampolines were used as training devices for pilots, whose bodies go through different orientation while in flight.

Dr. Smith added that trampolines evolved into consumer products when trampoline manufacturers discovered ways to break trampolines down into smaller parts at affordable prices. This led to the rapid expansion of backyard trampolines.

The popularity of trampolines continues to greatly increase, whether in the backyard or at a trampoline park or center. In fact, there are more than 1 million trampolines that are being used in backyards and recreational facilities all over the United States.

In 2006, the American Academy of Pediatrics recommended that trampolines should never be used in the home environment, in routine physical education classes or in outdoor playgrounds. In 2012, the American Academy of Pediatrics reaffirmed that position in summer safety tips this year, which advised parents should never purchase a home trampoline or allow children to use home trampolines. No explicit reference was made in regard to trampoline parks or centers.

There are several things that cause trampoline injuries. Some of the most prominent are:

Landing wrong on the trampoline
Missing protective devices
Too many people using a trampoline at the same time and colliding with one another
Lack of supervision or instruction
Improperly assembled trampolines
Falling from the trampoline platform.

As mentioned at the beginning, if your child has suffered trampoline injuries on a backyard trampoline or at a trampoline park, you really should get in touch with a personal injury attorney who will evaluate your case at no cost to you.