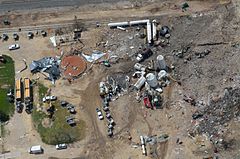 It was on Wednesday night, April 17, 2013, that a fire broke out at the West Fertilizer Company storage and distribution facility in West, Texas. As volunteer firefighters were fighting the blaze, an explosion took place that killed at least 15 people, injured more than 160 people, obliterated the fertilizer building, destroyed 60 to 80 homes, damaged 50 to 75 homes and destroyed a 50-unit apartment building. The explosion also heavily damaged the West Rest Haven nursing home and a nearby middle school.

West is a small town that is located about 20 miles north of Waco and 70 miles south of the Dallas-Fort Worth Metroplex. West has a population of just under 3,000 people. A large majority of the population is of Czech origin.

State and federal investigators are still trying to determine what caused the fire and explosion. A spokesman for the fertilizer company, Dan Keeney, said that officials of the West Fertilizer Company are not making any comments on the West fertilizer explosion lawsuits that have been filed as the company continues to cooperative with the investigation that is trying to find out what caused the fire and explosion.

The West fertilizer explosion lawsuits all have one thing in common. They allege that fertilizer plant officials were negligent in the operation of the facility, which caused the fire and explosion.


Not the first time

According to records of past litigation on file at the office of the McLennan County District Clerk, the fertilizer plant has had various names, owners and managers during its years of existence in West. This is not the first time that the company has been sued.

In 1974, the company was cited in a case that was filed by the district attorneys office. The company was fined $250 for hauling fertilizer without a permit.

Lawsuits were also filed in 1990 and 1994 that were dismissed by judges after two years. The reason being that the plaintiffs in each lawsuit failed to pursue them. Both of these lawsuits dealt with alleged defective sprayers from the company and fumes that came from fertilizer.

However, more in line with the current West fertilizer explosion lawsuits, in 1992, former West policeman Jesse Anderson received an undisclosed and confidential settlement from West Chemical and Fertilizer Co. following an incident of an ammonia leak in May 1991.

It remains to be seen how many more West fertilizer explosion lawsuits will eventually be filed against Adair Grain Inc.. The determining factor will probably be the cause of the fire and explosion when it is discovered by investigators.

If you or a loved one was injured or suffered damages in the West fertilizer fire and explosion, or some other type of accident, it may be in your best interests to contact a personal injury attorney. You may need legal help in order to receive the compensation that is due you.